India is well known for its sacred places and a land that holds the heritage of a few widely followed ancient religions – Hinduism, Buddhism, Jainism, Sikhism. This country has also embraced wisdoms of other religious beliefs as brought by people from external territories. Even then, if your mind needs more to know, enter into the remote tribal lands of India to observe their life and customs – An unfamiliar spiritual expedition to give an unending motivation. Let me link you with it today and tell about Donyi-Polo of Arunachal Pradesh.

Arunachal Pradesh – What It Gives?

Arunachal Pradesh, a densely forested, cloud covered, mountainous land became home for the migrants from Burma (now Myanmar) and Tibet. We assume them to be the ancient mongoloid tribe. They came but no one knew when. Their existence remained a secret for a long time because of the natural obstacles that outlined this north eastern part of India. Hence, there formed a singular tribal culture in Arunachal Pradesh to encourage human inhabitation.

Adi, Apatani, Tagin, Miri and Nyishi are amongst the oldest known tribes of Arunachal Pradesh. At the beginning, they took hunting and farming as their mode of living. They have language without any textual scripts. Their knowledge is spread through oral tradition coming down by words from one stage to another. Thus, today we’ve a few sources, like, folk tales, riddles, religious chanting to give us their tradition and beliefs. Also, these indigenous people are splendid as bamboo craftsmen and tattoo artists. 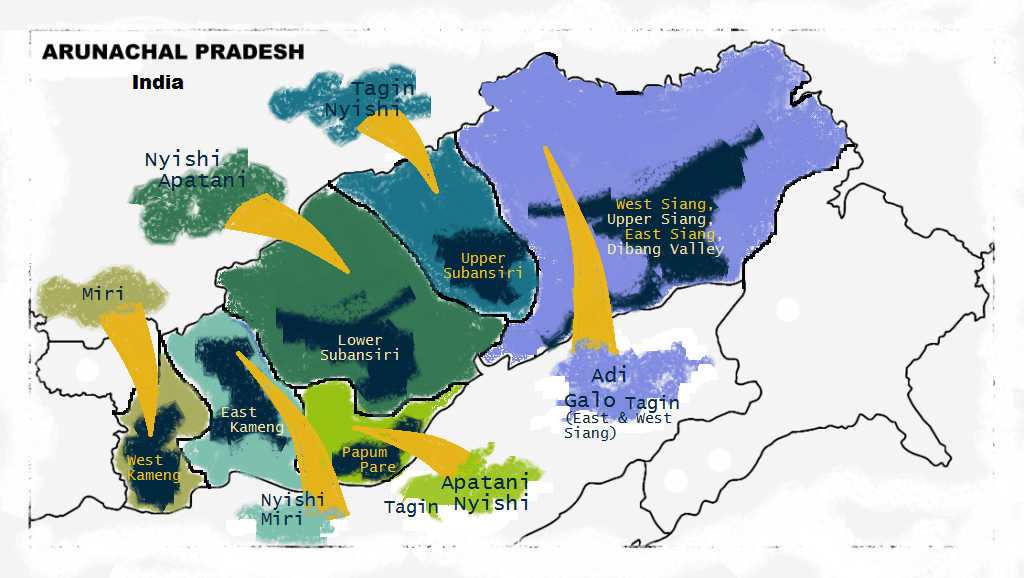 Narrated from Apatani Myth: Apatani ‘Shamans’ tell sacred stories of their origin where their primitive parents lived in ‘Wuhi‘ and ‘Lipya Supungs‘. These places can be in China and Mongolia. The story says about ‘Muddu Supung‘, can be in Tibet actually, where ‘Kibo-Riba‘, ‘Bani-Baro‘ and ‘Nichi-Nicha‘, the three superior forefathers of Apatanis were born.

Read the Apatani Myth: The Apatanis

Donyi-Polo of Arunachal Pradesh – What It Says?

Among these tribes, Adi, Apatani, Tagin, Miri and Nyishi, the valley settlers of Arunachal Pradesh, Donyi-Polo became a major tribal religion. It has probably come out from their knowledge of pre-Buddhist Bon spiritualism as a kind of primitive animistic practice. There, these Donyi-Polo believers of Arunachal Pradesh worship ‘Sun’ (Donyi) and ‘Moon’ (Polo) as their prime guardian spirits. The religion says that these two are the principal holy sources of energy from almighty Bo and Bomong to control life cycle and every activities that are seen in their surroundings.

Their oral mythology talks about one ancestor ‘Abu Tani‘ from whom they are born as a ‘Common Children’. In every form of life, a ‘Soul’ exists that is connected with all other life forms to create an unbreakable bond of survival. Their roles and acts all are being overseen and commanded by Donyi-Polo deities and spirits. Doying Bote, Gumin Soyin, Kine Nane are some other important Donyi-Polo tribal deities that are worshipped. See that Donyi-Polo teaches a simple theory of coexistence within the protection of nature as their mother.

Oral ‘Abu Tani‘ Folk Tale: The oral folk stories of Apatanis say about ‘Abu Tani‘, the first creature in human form, who was born from the play of two primitive gods ‘Chatung‘ and ‘Chanbha‘ with goddess ‘Chankangrima‘. Apatani sacred oral language is ‘Nyibu Agun‘, a different speech from the commonly spoken local words.

Donyi-Polo of Arunachal Pradesh is a Shamanistic religion. In these tribal communities, ‘Shamans’, the religious priests are the only one who can learn the difficult power and method of calling divine forces and seek their assistance for a problem. They have to learn ‘Herbal Healing’, the tribal medical art of curing diseases found in the region. These days, tribal medicines are mostly replaced. In the valleys of Arunachal Pradesh, a few ‘Shamans’ are left with this treatment knowledge, once that was believed as ‘Magic’.

Believers of Donyi-Polo of Arunachal Pradesh – What They Preserve?

Within this once secluded tribal land, Donyi-Polo is a confined nature worshipping procedure. It is only a major Arunachal religion of more or less about 3 lakh valley resident folk people. Whoever meets these tribes will know how beautiful they are to narrate their oral stories, myths and chanting. These folk tales are spoken in ‘Tani‘ Language, the tribal vocabulary of Adi, Apatani, Tagin, Miri and Nyishi. They say about their origin and the love of their mother nature.

Arunachal tribal religious customs are bonded with their farming occupation and social harmony. Their Donyi-Polo rituals are sometimes expensive, thorough and include animal sacrifice by building bamboo alters. It is a common existing custom in Adi and Galo Arunachal communities. In a long phase, influence of Christianity grew more following a large number of conversions. This mass drift was stopped by a local person Golgi Bote Talom Rukho, now known to be ‘Father of Modern Donyi-Poloism’.

A Tagin Donyi-Polo Festival: Tagin New Year Festival, ‘Si-Donyi‘ is the most important one in their community. They celebrate it every year from January 3rd to 6th. Tagins gather that time to dance, sing, feast and pray ‘Si‘ (Earth) and ‘Donyi‘ (Sun). The ritual is conducted by ‘Nyibu‘, their local priest, who recites ‘Uuyu Benam‘ (Higher World Chanting). The procedure ends with a sacrifice of ‘Mithun‘ (Gayal) for blessings from the spirits. The meat is served in the sacred community feast.

Big changes happened after his revival movement during 1970s. In this spirited flame, scattered Tani and Tibeto-Burmese groups came back to be unified again as a common clan. Modern principles of Donyi-Poloism received India Government’s support. Further, other International heritage protection groups came up to aid for its recognition. These days, Donyi-Polo of Arunachal Pradesh is a formalized and refined regional religious system for which temples are constructed. Devotees, of every age can read texts of Donyi-Polo prayer chants. Worshipping has become much simpler. An old animistic nature worshipping practice is thus alive in Arunachal Pradesh – The ONLY place to experience this spiritual sight.

Something Else: Earlier, I told a few period-changing accounts of tribal identity struggles on religious independence in my article ‘A Few Remarkable Life Stories Of ‘Adivasi’ Saints Of India‘.

A Few Remarkable Life Stories of ‘Adivasi’ Saints of India

Ideas Leading Towards the Spiritual Route to Heaven